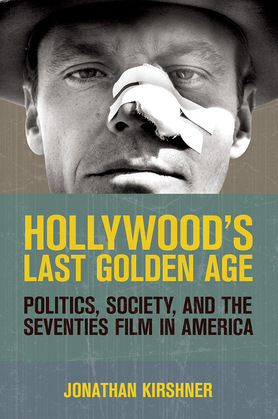 Between 1967 and 1976 a number of extraordinary factors converged to produce an uncommonly adventurous era in the history of American film. The end of censorship, the decline of the studio system, economic changes in the industry, and demographic shifts among audiences, filmmakers, and critics created an unprecedented opportunity for a new type of Hollywood movie, one that Jonathan Kirshner identifies as the "seventies film." In Hollywood's Last Golden Age, Kirshner shows the ways in which key films from this period-including Chinatown, Five Easy Pieces, The Graduate, and Nashville, as well as underappreciated films such as The Friends of Eddie Coyle, Klute, and Night Moves-were important works of art in continuous dialogue with the political, social, personal, and philosophical issues of their times.

These "seventies films" reflected the era's social and political upheavals: the civil rights movement, the domestic consequences of the Vietnam war, the sexual revolution, women's liberation, the end of the long postwar economic boom, the Shakespearean saga of the Nixon Administration and Watergate. Hollywood films, in this brief, exceptional moment, embraced a new aesthetic and a new approach to storytelling, creating self-consciously gritty, character-driven explorations of moral and narrative ambiguity. Although the rise of the blockbuster in the second half of the 1970s largely ended Hollywood's embrace of more challenging films, Kirshner argues that seventies filmmakers showed that it was possible to combine commercial entertainment with serious explorations of politics, society, and characters' interior lives.