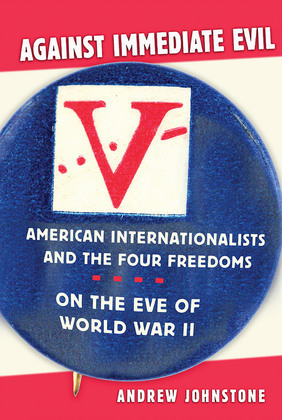 In Against Immediate Evil, Andrew Johnstone tells the story of how internationalist Americans worked between 1938 and 1941 to convince the U.S. government and the American public of the need to stem the rising global tide of fascist aggression. As war approached, the internationalist movement attempted to arouse the nation in order to defeat noninterventionism at home and fascism overseas. Johnstone's examination of this movement undermines the common belief that the Japanese attack on Pearl Harbor wrenched an isolationist United States into global armed conflict and the struggle for international power.

Johnstone focuses on three organizations—the American Committee for Non-Participation in Japanese Aggression, the Committee to Defend America by Aiding the Allies, and Fight For Freedom—that actively promoted a more global role for the United States based on a conception of the "four freedoms" later made famous by FDR. The desire to be free from fear was seen in concerns regarding America’s immediate national security. The desire to be free from want was expressed in anxieties over the nation’s future economic prosperity. The need for freedom of speech was represented in concerns over the potential loss of political freedoms. Finally, the need for freedom of worship was seen in the emphasis on religious freedoms and broader fears about the future of Western civilization. These groups and their supporters among the public and within the government characterized the growing global conflict as one between two distinct worlds and in doing so, set the tone of American foreign policy for decades to come.