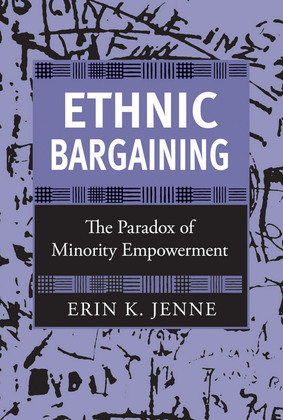 In Ethnic Bargaining, Erin K. Jenne introduces a theory of minority politics that blends comparative analysis and field research in the postcommunist countries of East Central Europe with insights from rational choice. Jenne finds that claims by ethnic minorities have become more frequent since 1945 even though nation-states have been on the whole more responsive to groups than in earlier periods. Minorities that perceive an increase in their bargaining power will tend to radicalize their demands, she argues, from affirmative action to regional autonomy to secession, in an effort to attract ever greater concessions from the central government.

The language of self-determination and minority rights originally adopted by the Great Powers to redraw boundaries after World War I was later used to facilitate the process of decolonization. Jenne believes that in the 1960s various ethnic minorities began to use the same discourse to pressure national governments into transfer payments and power-sharing arrangements. Violence against minorities was actually in some cases fueled by this politicization of ethnic difference.

Jenne uses a rationalist theory of bargaining to examine the dynamics of ethnic cleavage in the cases of the Sudeten Germans in interwar Czechoslovakia; Slovaks and Moravians in postcommunist Czechoslovakia; the Hungarians in Romania, Slovakia, and Vojvodina; and the Albanians in Kosovo. Throughout Ethnic Bargaining, she challenges the conventional wisdom that partisan intervention is an effective mechanism for protecting minorities and preventing or resolving internal conflict.