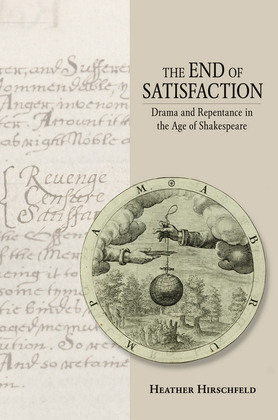 The End of Satisfaction

In The End of Satisfaction, Heather Hirschfeld recovers the historical specificity and the conceptual vigor of the term “satisfaction” during the sixteenth and early seventeenth centuries. Focusing on the term’s significance as an organizing principle of Christian repentance, she examines the ways in which Shakespeare and his contemporaries dramatized the consequences of its re- or de-valuation in the process of Reformation doctrinal change. The Protestant theology of repentance, Hirschfeld suggests, underwrote a variety of theatrical plots “to set things right” in a world shorn of the prospect of “making enough” (satisfacere).

Hirschfeld’s semantic history traces today’s use of “satisfaction”—as an unexamined measure of inward gratification rather than a finely nuanced standard of relational exchange—to the pressures on legal, economic, and marital discourses wrought by the Protestant rejection of the Catholic sacrament of penance (contrition, confession, satisfaction) and represented imaginatively on the stage. In so doing, it offers fresh readings of the penitential economies of canonical plays including Dr. Faustus, The Revenger’s Tragedy, The Merchant of Venice, and Othello; considers the doctrinal and generic importance of lesser-known plays including Enough Is as Good as a Feast and Love’s Pilgrimage; and opens new avenues into the study of literature and repentance in early modern England.