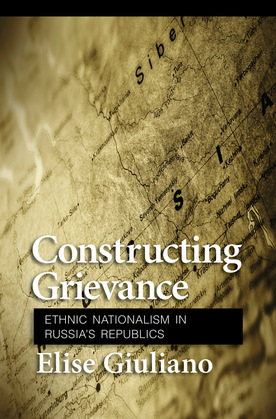 Demands for national independence among ethnic minorities around the world suggest the power of nationalism. Contemporary nationalist movements can quickly attract fervent followings, but they can just as rapidly lose support. In Constructing Grievance, Elise Giuliano asks why people with ethnic identities throw their support behind nationalism in some cases but remain quiescent in others. Popular support for nationalism, Giuliano contends, is often fleeting. It develops as part of the process of political mobilization-a process that itself transforms the meaning of ethnic identity. She compares sixteen ethnic republics of the Russian Federation, where nationalist mobilization varied widely during the early 1990s despite a common Soviet inheritance. Drawing on field research in the republic of Tatarstan, socioeconomic statistical data, and a comparative discourse analysis of local newspapers, Giuliano argues that people respond to nationalist leaders after developing a group grievance. Ethnic grievances, however, are not simply present or absent among a given population based on societal conditions. Instead, they develop out of the interaction between people's lived experiences and the specific messages that nationalist entrepreneurs put forward concerning ethnic group disadvantage.

In Russia, Giuliano shows, ethnic grievances developed rapidly in certain republics in the late Soviet era when messages articulated by nationalist leaders about ethnic inequality in local labor markets resonated with people's experience of growing job insecurity in a contracting economy. In other republics, however, where nationalist leaders focused on articulating other issues, such as cultural and language problems facing the ethnic group, group grievances failed to develop, and popular support for nationalism stalled. People with ethnic identities, Giuliano concludes, do not form political interest groups primed to support ethnic politicians and movements for national secession.