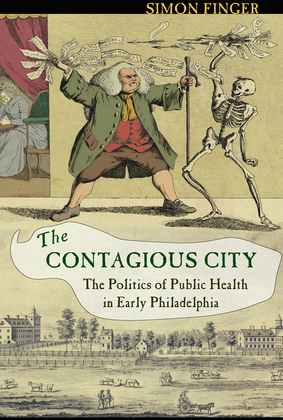 By the time William Penn was planning the colony that would come to be called Pennsylvania, with Philadelphia at its heart, Europeans on both sides of the ocean had long experience with the hazards of city life, disease the most terrifying among them. Drawing from those experiences, colonists hoped to create new urban forms that combined the commercial advantages of a seaport with the health benefits of the country. The Contagious City details how early Americans struggled to preserve their collective health against both the strange new perils of the colonial environment and the familiar dangers of the traditional city, through a period of profound transformation in both politics and medicine.

Philadelphia was the paramount example of this reforming tendency. Tracing the city's history from its founding on the banks of the Delaware River in 1682 to the yellow fever outbreak of 1793, Simon Finger emphasizes the importance of public health and population control in decisions made by the city's planners and leaders. He also shows that key figures in the city's history, including Benjamin Franklin and Benjamin Rush, brought their keen interest in science and medicine into the political sphere. Throughout his account, Finger makes clear that medicine and politics were inextricably linked, and that both undergirded the debates over such crucial concerns as the city's location, its urban plan, its immigration policy, and its creation of institutions of public safety. In framing the history of Philadelphia through the imperatives of public health, The Contagious City offers a bold new vision of the urban history of colonial America.