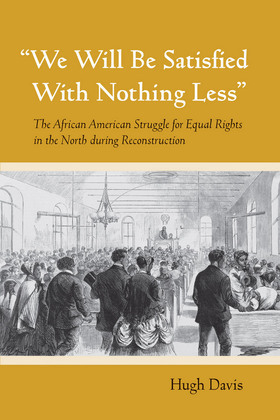 "We Will Be Satisfied With Nothing Less"

Historians have focused almost entirely on the attempt by southern African Americans to attain equal rights during Reconstruction. However, the northern states also witnessed a significant period of struggle during these years. Northern blacks vigorously protested laws establishing inequality in education, public accommodations, and political life and challenged the Republican Party to live up to its stated ideals.

In "We Will Be Satisfied With Nothing Less", Hugh Davis concentrates on the two issues that African Americans in the North considered most essential: black male suffrage rights and equal access to the public schools. Davis connects the local and the national; he joins the specifics of campaigns in places such as Cincinnati, Detroit, and San Francisco with the work of the National Equal Rights League and its successor, the National Executive Committee of Colored Persons. The narrative moves forward from their launching of the equal rights movement in 1864 to the "end" of Reconstruction in the North two decades later. The struggle to gain male suffrage rights was the centerpiece of the movement's agenda in the 1860s, while the school issue remained a major objective throughout the period. Following the ratification of the Fifteenth Amendment in 1870, northern blacks devoted considerable attention to assessing their place within the Republican Party and determining how they could most effectively employ the franchise to protect the rights of all citizens.