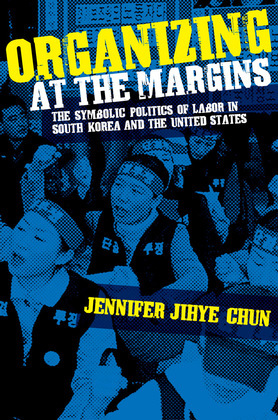 Organizing at the Margins

The realities of globalization have produced a surprising reversal in the focus and strategies of labor movements around the world. After years of neglect and exclusion, labor organizers are recognizing both the needs and the importance of immigrants and women employed in the growing ranks of low-paid and insecure service jobs. In Organizing at the Margins, Jennifer Jihye Chun focuses on this shift as it takes place in two countries: South Korea and the United States.

Using comparative historical inquiry and in-depth case studies, she shows how labor movements in countries with different histories and structures of economic development, class formation, and cultural politics embark on similar trajectories of change. Chun shows that as the base of worker power shifts from those who hold high-paying, industrial jobs to the formerly "unorganizable," labor movements in both countries are employing new strategies and vocabularies to challenge the assault of neoliberal globalization on workers' rights and livelihoods.

Deftly combining theory and ethnography, she argues that by cultivating alternative sources of "symbolic leverage" that root workers' demands in the collective morality of broad-based communities, as opposed to the narrow confines of workplace disputes, workers in the lowest tiers are transforming the power relations that sustain downgraded forms of work. Her case studies of janitors and personal service workers in the United States and South Korea offer a surprising comparison between converging labor movements in two very different countries as they refashion their relation to historically disadvantaged sectors of the workforce and expand the moral and material boundaries of union membership in a globalizing world.