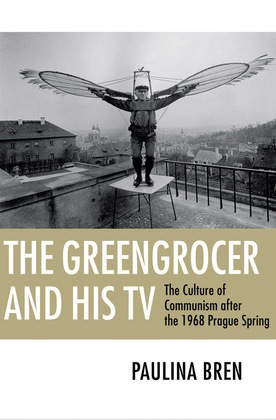 The greengrocer and his TV

The 1968 Soviet invasion of Czechoslovakia brought an end to the Prague Spring and its promise of "socialism with a human face." Before the invasion, Czech reformers had made unexpected use of television to advance political and social change. In its aftermath, Communist Party leaders employed the medium to achieve "normalization," pitching television stars against political dissidents in a televised spectacle that defined the times.

The Greengrocer and His TV offers a new cultural history of communism from the Prague Spring to the Velvet Revolution that reveals how state-endorsed ideologies were played out on television, particularly through soap opera-like serials. In focusing on the small screen, Paulina Bren looks to the "normal" of normalization, to the everyday experience of late communism. The figure central to this book is the greengrocer who, in a seminal essay by Václav Havel, symbolized the ordinary citizen who acquiesced to the communist regime out of fear.

Bren challenges simplistic dichotomies of fearful acquiescence and courageous dissent to dramatically reconfigure what we know, or think we know, about everyday life under communism in the 1970s and 1980s. Deftly moving between the small screen, the street, and the Central Committee (and imaginatively drawing on a wide range of sources that include television shows, TV viewers' letters, newspapers, radio programs, the underground press, and the Communist Party archives), Bren shows how Havel's greengrocer actually experienced "normalization" and the ways in which popular television serials framed this experience.

Now back by popular demand, socialist-era serials, such as The Woman Behind the Counter and The Thirty Adventures of Major Zeman, provide, Bren contends, a way of seeing-literally and figuratively-Czechoslovakia's normalization and Eastern Europe's real socialism.