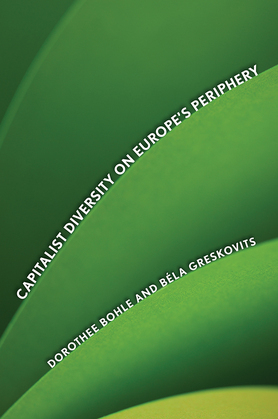 With the collapse of the Council for Mutual Economic Assistance in 1991, the Eastern European nations of the former socialist bloc had to figure out their newly capitalist future. Capitalism, they found, was not a single set of political-economic relations. Rather, they each had to decide what sort of capitalist nation to become. In Capitalist Diversity on Europe's Periphery, Dorothee Bohle and Béla Geskovits trace the form that capitalism took in each country, the assets and liabilities left behind by socialism, the transformational strategies embraced by political and technocratic elites, and the influence of transnational actors and institutions. They also evaluate the impact of three regional shocks: the recession of the early 1990s, the rolling global financial crisis that started in July 1997, and the political shocks that attended EU enlargement in 2004.

Bohle and Greskovits show that the postsocialist states have established three basic variants of capitalist political economy: neoliberal, embedded neoliberal, and neocorporatist. The Baltic states followed a neoliberal prescription: low controls on capital, open markets, reduced provisions for social welfare. The larger states of central and eastern Europe (Poland, Hungary, and the Czech and Slovak republics) have used foreign investment to stimulate export industries but retained social welfare regimes and substantial government power to enforce industrial policy. Slovenia has proved to be an outlier, successfully mixing competitive industries and neocorporatist social inclusion. Bohle and Greskovits also describe the political contention over such arrangements in Romania, Bulgaria, and Croatia. A highly original and theoretically sophisticated typology of capitalism in postsocialist Europe, this book is unique in the breadth and depth of its conceptually coherent and empirically rich comparative analysis.