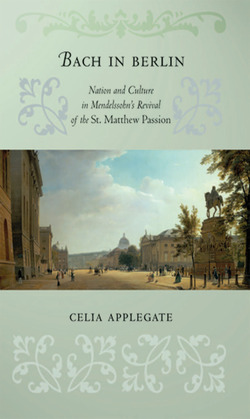 Bach's St. Matthew Passion is universally acknowledged to be one of the world's supreme musical masterpieces, yet in the years after Bach's death it was forgotten by all but a small number of his pupils and admirers. The public rediscovered it in 1829, when Felix Mendelssohn conducted the work before a glittering audience of Berlin artists and intellectuals, Prussian royals, and civic notables. The concert soon became the stuff of legend, sparking a revival of interest in and performance of Bach that has continued to this day.

Mendelssohn's performance gave rise to the notion that recovering and performing Bach's music was somehow "national work." In 1865 Wagner would claim that Bach embodied "the history of the German spirit's inmost life." That the man most responsible for the revival of a masterwork of German Protestant culture was himself a converted Jew struck contemporaries as less remarkable than it does us today—a statement that embraces both the great achievements and the disasters of 150 years of German history.

In this book, Celia Applegate asks why this particular performance crystallized the hitherto inchoate notion that music was central to Germans' collective identity. She begins with a wonderfully readable reconstruction of the performance itself and then moves back in time to pull apart the various cultural strands that would come together that afternoon in the Singakademie. The author investigates the role played by intellectuals, journalists, and amateur musicians (she is one herself) in developing the notion that Germans were "the people of music." Applegate assesses the impact on music's cultural place of the renewal of German Protestantism, historicism, the mania for collecting and restoring, and romanticism. In her conclusion, she looks at the subsequent careers of her protagonists and the lasting reverberations of the 1829 performance itself.