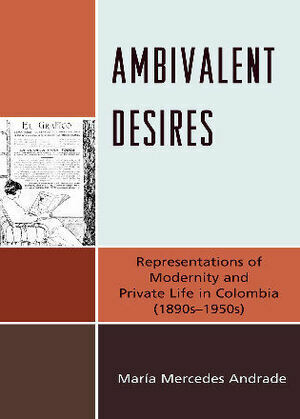 Ambivalent Desires: Representations of Modernity and Private Life in Colombia (1890s-1950s) is a literary and cultural study of the reception of modernity in Colombia. Unlike previous studies of Latin American modernization, which have usually focused on the public aspect of the process, this book discusses the intersection between modernity and the private sphere. It analyzes canonical and non-canonical works that reflect the existing ambivalence toward the modernizing project being implemented in the country at the time, and it discusses how the texts in question reinterpret, adapt, and even reject the ideology of modernity. The focus of the study is how the understanding of the relationship between modernity and private life relates to the project of constructing a modern nation, and the discontinuities and contradictions that appear in the process. The question of what modernity is, its implications for everyday life, and its desirability or undesirability as a new cultural paradigm were central issues in Colombian texts from the end of the nineteenth century through the first half of the twentieth. At stake was the definition of the nation's identity and the project of breaking away from the cultural patterns of the colonial past. Considering that the apparently peaceful process of modernization in Colombia was interrupted in the 1950s by the eruption of political violence across the country, this study situates itself on the eve of a crisis and asks how representations of modernity in texts from the period evidence the social fragmentation that may have led to it. The book begins with an analysis of the theme of the private collection in the work of JosZ Asunci-n Silva, and how it is used to propose a specific notion of personal and cultural identity. It continues with an analysis of the modernizing ideology of the popular magazine El GrOfico during the period of economic prosperity of the 1920s known as the 'Dance of the Millions,' focusing on the publication's advertisements and the section devoted to women and the home. Subsequently, the canonical writings of TomOs Rueda Vargas are analyzed in the context of the relation between autobiographical writing and public life, emphasizing the contradiction between the author's public liberalism and his private conservatism, and highlighting his critique of modern life. The works of previously neglected women writers Manuela Mallarino Isaacs, Juana SOnchez Lafaurie, and Fabiola Aguirre are studied in the context of women's relationship to modernity and their conflict between traditional roles that relegated them to the private sphere, and their desire to accept modern standards. The book concludes with an analysis of the novels of Ignacio G-mez DOvila, which have received scant attention to this date, as it discusses his critique of the upper classes' flight into the private and what the author sees as their alienation from a society on the verge of a crisis.