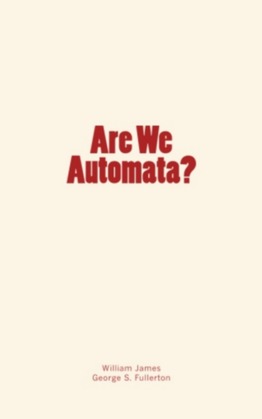 William James, American psychologist and philosopher, was mainly known by his works on The Principles of Psychology and the Pragmatism. ---
Everyone is now acquainted with the Conscious-Automaton-theory... The theory maintains that in everything outward we are pure material machines. Feeling is a mere collateral product of our nervous processes, unable to react upon them any more than a shadow reacts on the steps of the traveller whom it accompanies. Inert, uninfluential, a simple passenger in the voyage of life, it is allowed to remain on board, but not to touch the helm or handle the rigging. The theory also maintains that we are in error to suppose that our thoughts awaken each other by inward congruity or rational necessity, that disappointed hopes cause sadness, premisses conclusions, etc... The feelings are merely juxtaposed in that order without mutual cohesion, because the nerve-processes to which they severally correspond awaken each other in that order.
It may seem strange that this latter part of the theory should be held by writers, who have openly expressed their belief in Hume's doctrine of causality. That doctrine asserts that the causality we seem to find between the terms of a physical chain of events, is an illegitimate outward projection of the inward necessity by which we feel each thought to sprout out of its customary antecedent. Strip the string of necessity from between ideas themselves, and it becomes hard indeed for a Humian to say how the notion of causality ever was born at all.
Are We Automata?