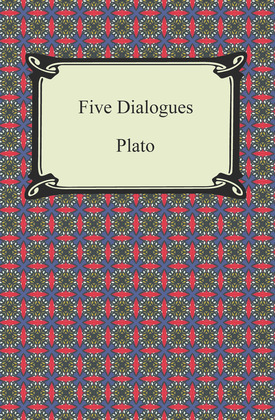 The ancient Greek Philosopher Plato was born around 425 BCE to an aristocratic family. He enjoyed the privilege of being a student of Socrates, but would eventually go on to form his own school, the Academy. Plato, most remembered for his philosophical work "The Republic," was disciplined in all forms of writing. His dialogues are among the most popular and still studied by students and lovers of philosophy. Plato wrote his dialogues to reflect the wisdom that Socrates had imparted to the students. In fact, while many of Socrates' dialogues with his other students are recorded in Plato's writings, Plato's own voice never appears in any of the dialogues. In "Five Dialogues," Plato's works "Euthyphro," "Apology," "Critico," "Meno," and "Phaedo" all feature Socrates speaking to a student or friend who is asking about laws, the virtue of mankind, the purpose of the gods, and death. Each dialogue searches through different facets of philosophy and makes the reader question their own personal beliefs and morals. While there is no underlying storyline, the dialogues follow important moments in Socrates' life, from his trial to his death. He was charged by the government for not believing in the Greek gods and was eventually put to death by having to drink the poison Hemlock. Plato's works strove to record and safeguard his teacher's wisdom for future generations to discover.