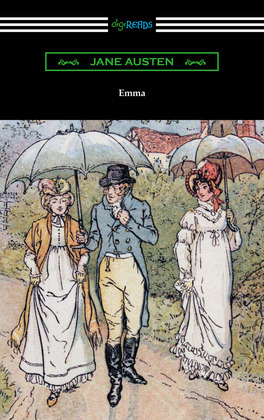 Emma (with an Introduction by Austin Dobson)

First published at the end of 1815, Jane Austen’s “Emma” is the story of Emma Woodhouse, a young girl from a good home that does not need the financial support of a husband and is determined not to marry. Emma however is not opposed to the idea of marriage for others and is determined to play matchmaker between the local citizens. Greatly overestimating her own matchmaking abilities, the headstrong young girl is blind to the dangers of meddling in the affairs of others. When she confuses the attentions of Mr. Elton, the local vicar, as interest for her friend Harriet Smith, she briefly ruins the opportunity for Harriet to marry a respectable, educated, and well-spoken young farmer named Robert Martin. When Mr. Elton rejects the idea of being matched with Harriet, the girl is heartbroken, and Emma begins to realize that her actions although well-intended maybe doing more harm than good. In spite of Emma’s resolve not to marry she is presented with opportunities for romance throughout the book and eventually considers the prospect of marriage. “Emma,” a lively comedy of manners, is a classic story of 19th century romance and relationships. This edition includes an introduction by Austin Dobson and a biographical afterword.