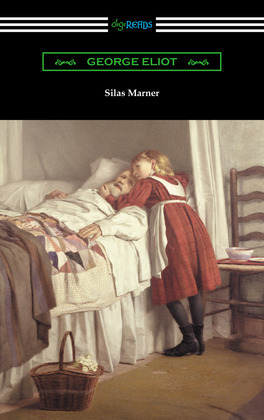 Silas Marner (with an Introduction by Esther Wood)

First published in 1861, “Silas Marner” is George Eliot’s tale of an English linen weaver. When Silas is falsely accused of stealing the funds of the small Calvinist congregation to which he belongs, his fiancé breaks off their engagement and he flees in shame to the English Midlands settling near the rural village of Raveloe in Warwickshire. Here he lives alone quietly plying his trade in the pursuit of gold. After awhile Silas has amassed a small fortune but when he returns one day to his cottage he finds his stash of gold stolen. Devastated by this loss, Silas sinks into a deep state of gloom. His life soon changes though when he finds a young girl resting in his home. The child’s mother, Molly, is the opium addicted estranged wife of fellow villager Godfrey Cass. Silas finds Molly dead in the snow where she has laid down to rest after taking some opium. Silas adopts the young girl whom he names Eppie. Despite the loss of his fortune Silas finds a new treasure in the golden-haired young girl, giving his life a new meaning. Eliot’s tale is a relatively simple one however it is noted for its realism concerning human relationships and in how it deals with the themes of religion in society, custom and tradition, status and community, and the impact of industrialization in 19th century England. This edition includes an introduction by Esther Wood and a biographical afterword.