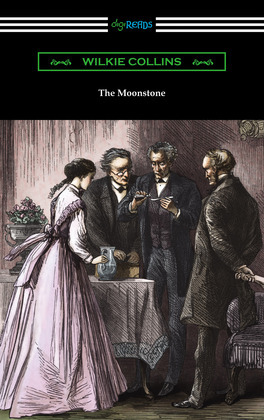 First published serially in 1868, Wilkie Collins’s “The Moonstone” is generally considered as the first full length detective novel in the English language. The novel concerns a large valuable diamond plundered from India by Colonel Herncastle during the Siege of Seringapatam. Herncastle, who has been shunned by his own family, decides to bequeath the diamond to his niece Rachel Verinder on her eighteenth birthday. At her birthday party, Rachel wears the Moonstone for all to see, later that night the diamond goes missing from her room and quickly an investigation ensues to discover the identity of the thief and recover the jewel. Suspicion quickly falls upon three Indian jugglers at the party who are actually disguised Hindu priests who have dedicated their lives to recovering the diamond which has great religious significance. Despite the efforts of Sergeant Cuff, a renowned detective, the night ends with the mystery unsolved. Described by G. K. Chesterton as “probably the best detective tale in the world”, “The Moonstone” is one of Wilkie Collins’s most popular works which influenced the development an entirely new genre of fiction. This edition includes a biographical afterword.