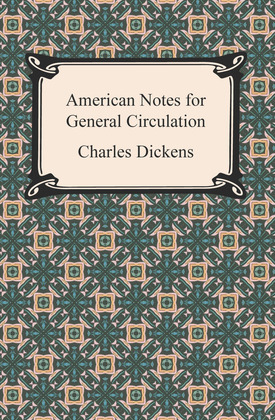 Charles Dickens (1812-1870) was an English short story writer, dramatist, essayist, and the most popular novelist to come from the Victorian era. He created some of the most iconic characters and stories in English literature, including Mr. Pickwick from "The Pickwick Papers", Ebenezer Scrooge from "A Christmas Carol", David Copperfield, and Pip from "Great Expectations", to name a few. In 1842, Dickens and his wife travelled to the United States and Canada for the first time, and during his time there he kept a travelogue which he later published as "American Notes for General Circulation". In it, he lays out his impressions of America: a powerful condemnation of slavery, high regard for President John Tyler, impressions of the prisons and mental institutions, criticism of the press, and parodies of the locals. Although he was generally impressed with what he found, he could not forgive the existence of slavery. This American journey was also an inspiration for his novel "Martin Chuzzlewit".