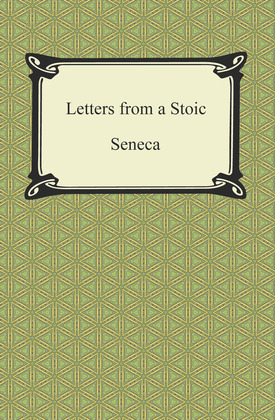 Letters from a Stoic (The Epistles of Seneca)

In ancient Rome, Seneca the Younger rose to power as a politician and statesman during the middle of his life. After being exiled by Emperor Caligula, he was finally welcomed back to Rome as Nero's minister. He gained significant wealth, though Seneca often despised his own standing because of his personal philosophy. At the end of his life, Seneca wrote a number of letters to the Roman governor of Sicily. From this collection of letters comes "Letters from a Stoic." In this work, the philosopher wrote about the essential tenants of Stoicism and how to follow a philosophy that required a person to humanize a society that was often cold and difficult. Many people read these letters and come away with a greater understanding of Stoicism; the people who practiced Stoicism often lived the phrase "actions speak louder than words," meaning that Stoics wanted their deeds to exhibit their rational and calm nature. The texts in "Letters from a Stoic" also reveal how Seneca and his contemporaries wanted people to treat others with the same respect they wanted for themselves. He was disgusted with the harsh and unethical treatment of slaves that was prevalent at the time, and he was against Nero's idea of entertainment which entailed throwing martyrs, gladiators, and animals into a fighting arena. Although Stoicism is not now as widely practiced as it once was, many people can still find wisdom and inspiration through Seneca's words and letters.