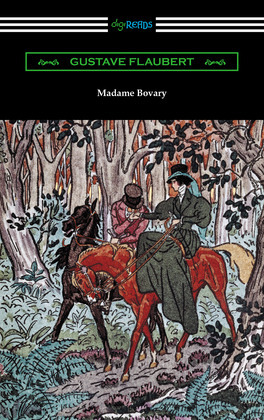 Gustave Flaubert’s “Madame Bovary” is the classic tale of its title character, Emma Bovary, the second wife of Charles Bovary, a well meaning yet plodding and clumsy doctor. Emma is an educated young woman who longs for the luxury and romance that she reads about in the popular novels of the day. When the two attend an elegant ball given by the Marquis d’Andervilliers, her longing for something more than the dullness provided by her own marriage can no longer be contained. In order to escape the banalities and emptiness of her everyday life a series of adulterous affairs ensue. “Madame Bovary” is considered by many as one of the greatest novels ever written. Although it was attacked for obscenity when it first appeared in Paris in 1856, “Madame Bovary” became an instant success for the author. Flaubert’s quest for literary perfection is greatly exemplified in the craft of this work, which has been heralded as a seminal work of literary realism. This edition follows the translation of Eleanor Marx-Aveling, includes an introduction by Ferdinand Brunetière, and a biographical afterword.