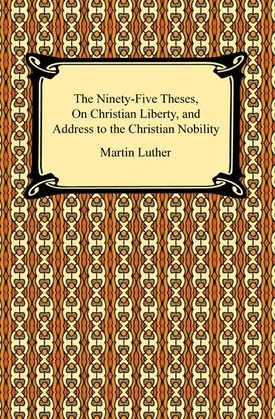 The Ninety-Five Theses, On Christian Liberty, and Address to the Christian Nobility

Collected together in this volume are the following three works by Martin Luther: "The Ninety-Five Theses", "On Christian Liberty", and "Address to the Christian Nobility". Martin Luther, the founder of the Protestant movement and one of the most important figures in all of religious history puts forth his objections to the Catholic Church in these classic religious texts. "The Ninety-Five Theses on the Power and Efficacy of Indulgences" is Martin Luther's list of concerns on corruption in the Roman Catholic Church. This 1517 document has since been widely acknowledged as the catalyst for the Protestant Reformation. "On Christian Liberty" is Luther's third major treatise in which he details his doctrines on justification by faith and the priesthood of all believers, and eventually expands on the concept of freedom through grace and its meaning for mankind. Finally in this work we find the "Address to the Christian Nobility" which predates "On Christian Liberty" and further discusses the religious beliefs of Martin Luther. This collection of foundational works of the Protestant movement is essential reading for religious scholars and laymen alike.