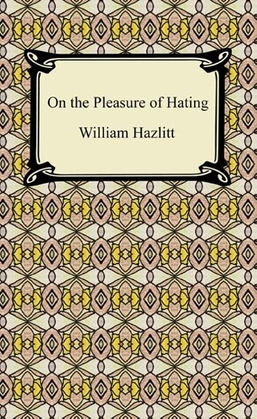 On the Pleasure of Hating

Appearing as part of his Table-Talk series, a conversational series written on topics concerning every day issues, William Hazlitt wrote "On the Pleasure of Hating" in 1823 during a bitter period of his life, amidst rising controversy over his previous works, as well as the dissolution of his marriage. Disgusted with the flowery romantic literature which was flourishing in that post-French Revolution period, Hazlitt drew inspiration from the works of Jean Jacques Rousseau, Edmund Burke, and various well-known English poets. He became known as one of the first English writers to make a profession of descriptive criticism. Fascinated with the extremes of human capabilities, Hazlitt wrote this essay as a plea for the understanding not merely of the pleasures of hating, but of the pleasures of realism. This collection includes seven essays: "The Fight," "The Indian Jugglers," "On the Spirit of Monarchy," "What is the People?", "What is the People? (concluded)," "On Reason and Imagination," and "On the Pleasure of Hating."