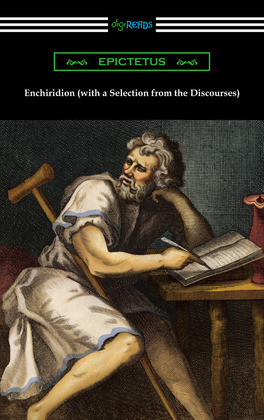 Enchiridion (with a Selection from the Discourses) [Translated by George Long with an Introduction by T. W. Rolleston]

Greek-speaking philosopher Epictetus was born into slavery around 55 AD at Hierapolis in the ancient Kingdom of Phrygia, which today is located in the city of Pamukkale, Turkey. He lived in Rome until his banishment from the city, after which he would spend the rest of his life in the Northwestern Greek city of Nicopolis. Epictetus was one of the most prominent of the stoic philosophers. Stoicism was the school of philosophy that taught detachment from one’s emotions so that truth may be arrived at through reason. To the stoic this detachment allows the natural law of the universe to reveal itself allowing harmony with the world to be achieved. This philosophy is exemplified in Epictetus’ most famous work, the “Enchiridion”, which serves as a manual for the everyday practice of the philosophy. Compiled by Epictetus’ student Arrian, the “Enchiridion” or “Handbook” provides a simple practical philosophy which at its heart emphasizes the acceptance of one’s circumstances in order to achieve happiness in life. A more detailed examination of the philosophy can be found within the discourses of Epictetus, of which a representative selection are presented here in this volume. This edition follows the translation of George Long and includes an introduction by T. W. Rolleston.