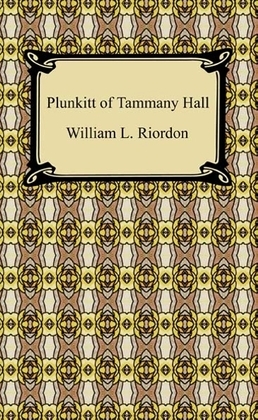 As a reporter for the "New York Evening Post" during the time of New York's Tammany Hall Machine, William Riordan compiled and published this work in 1905 from a series of articles he wrote on George Washington Plunkitt, the millionaire ward boss of New York's 15th District. Plunkitt is best remembered as a streetwise politician who practiced what he called "honest graft," or what is otherwise known today as "machine politics." Of the Tammany Hall bosses, he alone spoke candidly and on the record about how to get and successfully retain political power and wealth. This collection of interviews is an honest and accurate account of Plunkitt's critical analysis of social reformers and the federal government, void of editorial gloss and comment, and preserving the original speech and slang which made Plunkitt notorious. "Plunkitt of Tammany Hall" has given generations of scholars insight into the controversy, animosity, corruption and sensationalism of the American political machine in its heyday.