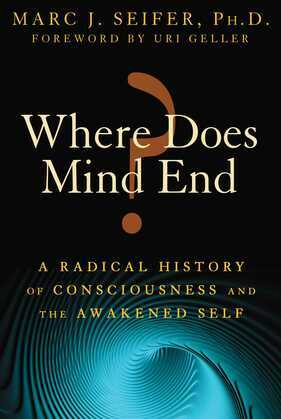 Where Does Mind End?

A new comprehensive model of mind and its nearly infinite possibilities

• Shows that we have consciousness for a reason; it is humanity’s unique contribution to the cosmos

The culmination of 30 years of research, Where Does Mind End? takes you on an inward journey through the psyche­--exploring the highest states of consciousness; the insights and theories of ancient and modern philosophers, psychologists, and mystics; the power of dreams, chi energy, tarot, and kundalini yoga; and proof of telepathy and other facets of parapsychology--to explain the mystery of consciousness and construct a comprehensive model of mind and its nearly infinite possibilities.

Starting with the ancients and early philosophers such as Zoroaster, Aristotle, Descartes, and Leibniz, the author examines models of mind that take into account divine and teleological components, the problem and goal of self-understanding, the mind/body conundrum, and holographic paradigms. Seifer then moves to modern times to explain the full range of Freud’s psychoanalytic model of mind, exploring such ideas as the ego, superego, and id; the unconscious; creativity; and self-actualization. Using Freud’s psychoanalytical model as framework, he reveals an overarching theory of mind and consciousness that incorporates such diverse concepts as Jung’s collective psyche; ESP; the Kabbalah; Gurdjieff’s ideas on behaviorism and the will; the philosophies of Wilhelm Reich, P. D. Ouspensky, and Nikola Tesla; the personality redevelopment strategies of Tony Robbins; and the Dalai Lama’s and Rudolf Steiner’s ideas on the highest states of consciousness. Recasting psychology as a vehicle not for mental health but for higher consciousness, he shows that by casting off the mechanical mental operation of day-to-day life, we naturally attain the self-integration to which traditional psychology has long aspired. By entering the true path to fulfillment of the soul’s will, we help the planet by transforming ourselves and raising our energy to a higher realm.