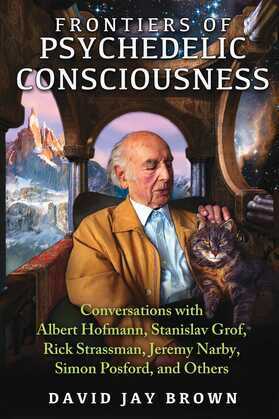 • Explores their profound reflections on the intersections between psychedelics and a wide range of topics, including psychology, creativity, music, the near-death experience, DNA, and the future of psychedelic drug medical research

After many dark years of zealous repression, there are now more than a dozen government-approved clinical studies with psychedelics taking place around the globe. But what does the future hold for psychedelic research and the expansion of consciousness?

Demonstrating deep knowledge of his interviewees’ work, Brown elicits profound reflections from them as well as their considered opinions on the future of psychedelic drug medical research, God and the afterlife, LSD and mysticism, DMT research and non-human entity contact, problem-solving and psychedelics, ayahuasca and DNA, psilocybin and the religious experience, MDMA and PTSD, releasing the fear of death, the tryptamine dimension, the therapeutic potential of salvia, and the intersections between psychedelics and creativity, ecology, paranormal phenomena, and alternate realities.

In each interview we discover how these influential minds were inspired by their use of entheogens. We see how psychedelics have the potential to help us survive as a species, not only by their therapeutic benefits but also by revealing our sacred connection to the biosphere and by prompting people to begin on the path of spiritual evolution.