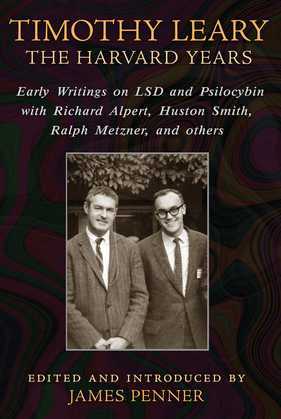 Timothy Leary: The Harvard Years: Early Writings on LSD and Psilocybin with Richard Alpert, Huston Smith, Ralph Metzner, and others

The first collection of Leary’s writings devoted entirely to the research phase of his career, 1960 to 1965

• Presents Leary’s early scientific articles and scholarly essays, including those on the Harvard Psilocybin Project, the Concord Prison Project, and the Good Friday Experiment

On May 27, 1963, Dr. Timothy Leary and Dr. Richard Alpert were dismissed from Harvard University’s Psychology Department--a watershed event marking the moment when psychedelic drugs were publicly demonized and driven underground. Today, little is known about the period in the early 1960s when LSD and psilocybin were not only legal but also actively researched at universities.

Presenting the first collection of Leary’s writings devoted entirely to the research phase of his career, 1960 to 1965, this book offers rare articles from Leary’s time as a professor in Harvard’s Psychology Department, including writings from the Harvard Psilocybin Project, the Concord Prison Project, and the Good Friday Experiment. These essays--coauthored with Richard Alpert, Huston Smith, Ralph Metzner, and other psychedelic research visionaries--explore the nature of creativity and the therapeutic, spiritual, and religious aspects of psilocybin and LSD. Featuring Leary’s scientific articles and a rare account of his therapeutic approach, “On Existential Transaction Theory,” the book also includes Leary’s final essay from his time at Harvard, “The Politics of Consciousness,” as well as controversial articles published shortly after his dismissal.

With an editor’s introduction examining the Harvard Drug Scandal and a critical preface to each essay, this book of seminal early writings by Leary--appearing in unabridged form--shows why he quickly became an articulate spokesperson for consciousness expansion and an iconic figure for the generation that came of age in the 1960s.