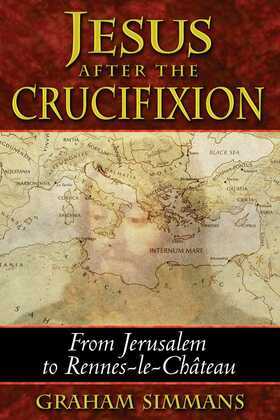 Jesus after the Crucifixion

Suggests that Jesus survived the crucifixion, went to Egypt, then settled in France

• Reveals new discoveries that show the beginnings of Christianity in Egypt

• Presents historical and archaeological research that proves a connection between Jerusalem, Egypt, and Rennes-le-Château in the south of France

• Posits Rennes-le-Château as the actual location of Jesus Christ’s tomb, and that writings by him will be found there

Jesus did not die on the cross. He survived and went to southern France with his wife, Mary. This possibility is proposed by Graham Simmans, who spent many years on a quest to find the real beginnings of Christianity. Simmans believes that the spread of Christianity beyond Jerusalem was tied to Jesus’s survival of the crucifixion and his subsequent emigration to Europe. Using Coptic and Jewish sources, including the Talmud, that allow a glimpse of the Christian philosophy espoused by Jesus, he contends that true Christianity was brought into France, Britain, and Spain from first century Egypt and Judea, not fourth- and fifth-century Rome.

His investigation shows that after a time in Egypt, Jesus settled in Rennes-le-Château, a sophisticated and cosmopolitan center of spiritual diversity. It was a natural move for Jesus to settle in the Narbonne area of France--an area already heavily settled by Jewish and Gnostic groups. Here, safely outside the reach of the cultural dictatorship of the Roman Church, the Gnostic secrets he taught survived the centuries. Later, the Knights Templar centered their activity in the Languedoc region around Rennes-le-Château, where, within the Jewish communities, a well-connected and influential opposition to Rome already existed. This resistance to Rome gave rise to a religious culture that included elements of Gnostic, Pythagorean, and Kabbalistic teachings. Until the Crusades against the Cathar heretics reasserted the dominion of Rome, the culture that flourished around Rennes-le-Château embodied the true essence of Christ’s message.