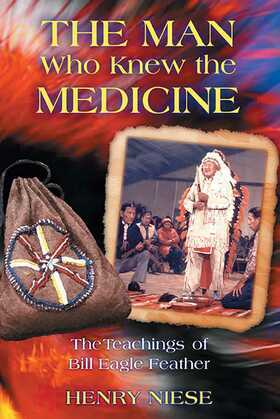 The Man Who Knew the Medicine: The Teachings of Bill Eagle Feather

The teachings of Bill Eagle Feather, Sun Dance chief and medicine man of the Rosebud Sioux, as told by his apprentice.

• Reveals personal accounts of important Native American rituals such as the yuwipi and the sun dance.

• Includes stories and teachings from the last years of Bill Eagle Feather's life.

Lakota medicine man Bill Schweigman Eagle Feather gained widespread recognition as an uncompromising spiritual leader in the 1960s when he defied a U.S. government ban on Indian religious practice and performed the Sun Dance ritual with public piercing. He continued on as Sun Dance chief and teacher of the Lakota way of life until his death in 1980.

Author Henry Niese met Bill Eagle Feather during a sweatlodge ceremony preceding a Sun Dance on the Rosebud Sioux Reservation in 1975. That was the beginning of the relationship between student and teacher that is captured with humor and respect in The Man Who Knew the Medicine. Niese brings readers along on his journey from outsider to initiate to elder, a transformation guided by Bill Eagle Feather. He describes sacred traditions such as the sweatlodge, the yuwipi, and the powerful Sioux Sun Dance, which Niese participated in for 16 years on the Rosebud reservation. His firsthand accounts provide a portal into a sacred reality as well as insight into the struggles of the Indian community to perpetuate its values and religious truths in the context of contemporary America. Above all, The Man Who Knew the Medicine offers the opportunity to experience the unique personality of a fascinating individual and respected healer through the eyes of a friend and a student.