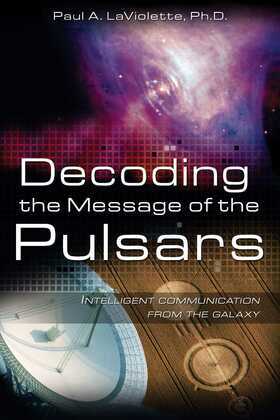 Decoding the Message of the Pulsars: Intelligent Communication from the Galaxy

• Contains extensive analysis of pulsar data, revealing new ideas about the origins and functions of pulsars

In 1967, astronomers began receiving and cataloging precisely timed radio pulses from extraterrestrial sources, which they called pulsars. These pulsars emit laserlike radio beams that penetrate through space much like searchlight beams. Paul LaViolette, who has been researching pulsars for over 25 years, shows that while these pulsars have long been assumed to be spinning stars, the true nature of these radio sources has been grossly misunderstood.

In Decoding the Message of the Pulsars, LaViolette shows that pulsars are distributed in the sky in a nonrandom fashion, often marking key galactic locations, and that their signals are of intelligent origin. Using extensive scientific data to corroborate his theory, he presents evidence of unusual geometric alignments among pulsars and intriguing pulse-period relationships. Equally compelling is the message LaViolette contends is being sent by these extraterrestrial beacons: a warning about a past galactic core explosion disaster that could recur in the near future.