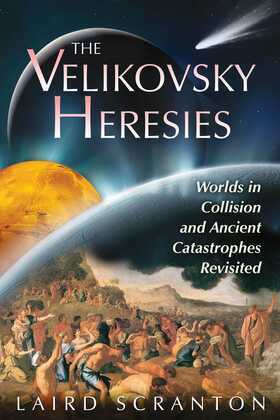 The Velikovsky Heresies: Worlds in Collision and Ancient Catastrophes Revisited

• Presents recently translated ancient texts from China, Korea, and Japan that uphold the cometlike descriptions of Venus cited by Velikovsky

• Offers scientific explanations for many disputed aspects of Velikovsky’s theories, such as how Venus could have transformed from a comet into an orbiting planet

Surrounded by controversy even before its publication in 1950, Immanuel Velikovsky’s Worlds in Collision introduced the provocative theory that Venus began as a brilliant comet ejected by Jupiter around 1600 BCE, wreaking chaos on Mars and Earth as it roamed through our solar system prior to settling into its current orbit. Immediately dismissed without any investigation and subject to vicious attacks, Velikovsky’s theory is now poised for reexamination in light of recent astronomical and archaeological findings.

Exploring the key points of Velikovsky’s theories, Laird Scranton presents evidence from recent space probe missions to show that Venus still exhibits cometlike properties, such as its atmospheric composition, and could be a young planet. Reviewing the widespread cometlike descriptions of Venus from 1500 BCE to 750 BCE as well as Velikovsky’s observation that no records of Venus exist prior to 1600 BCE, Scranton reveals recently translated ancient texts from China, Korea, and Japan that further uphold Velikovsky’s theories. Examining evidence of major geomagnetic and climate-change events around 1500 BCE and 750 BCE, corresponding with close passes of the comet Venus and its impact with Mars, the author offers scientific explanations for many disputed aspects of Velikovsky’s theories, such as how Venus transformed from a comet into an orbiting planet. By updating this unresolved controversy with new scientific evidence, Scranton helps us to understand how it was that Worlds in Collision was the one book found open on Albert Einstein’s desk at the time of his death.