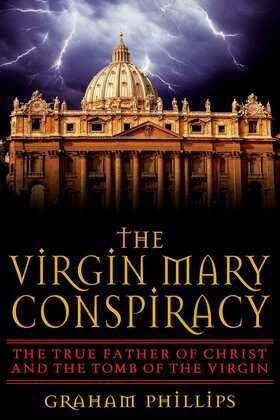 • Introduces the theory that Jesus's father was Antipater, son of Herod

What became of the Virgin Mary after the Crucifixion is one of the greatest mysteries of the Bible. Although it appears nowhere in the Bible, the belief in the Assumption-Mary's bodily ascension into heaven-is accepted by many Christians as historical fact. Some, however, believe that Mary died naturally and was buried in a tomb in Jerusalem's Valley of Jehosaphat. Others say that her final resting place was in the Roman ruins of Ephesus in Asia Minor.

In 1950 Giovanni Benedetti, an archaeologist attached to the Vatican museum, found a fourth-century manuscript indicating that Mary had been smuggled out of Palestine to an island off the west coast of Britain. According to Benedetti's findings, England's first Bishop, St. Augustine, discovered Mary's tomb there in A.D. 597. The reigning pope, Gregory the Great, forbade St. Augustine to speak of this, initiating a conspiracy of silence that lasted 1,400 years. Similarly, as Benedetti was about to publish his findings, he was instructed by the Vatican to discontinue his research. Soon after, the Roman Catholic Church declared the Assumption dogma.

In The Virgin Mary Conspiracy Graham Phillips unravels the truth behind this centuries-old ecclesiastical cover-up and discovers what may be Mary's final resting place. During his extensive research Phillips also discovered another controversial theory revealing that Jesus was the son of Antipater, the son of Herod, and therefore the true heir to Herod's throne, thus explaining his title of "King of the Jews."