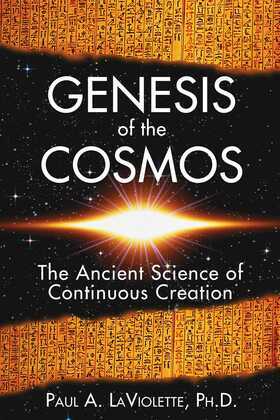 Genesis of the Cosmos

Recent developments in theoretical physics, including systems theory and chaos theory, are challenging long-held mechanistic views of the universe. Many thinkers have speculated that the remnants of an ancient science survive today in mythology and esoteric lore, but until now the scientific basis for this belief has remained cloaked in mystery. Paul LaViolette reveals the remarkable parallels between the cutting edge of scientific thought and creation myths from the dawn of civilization. With a scientific sophistication rare among mythologists, LaViolette deciphers the forgotten cosmology of ancient lore in a groundbreaking scientific tour de force. In direct, nontechnical language, he shows how these myths encode a theory of cosmology in which matter is continually growing from seeds of order that emerge spontaneously from the surrounding subquantum chaos.

Exposing the contradictions that bedevil the big bang theory, LaViolette offers both the specialist and the general reader a controversial and highly stimulating critique of prevailing misconceptions about the seldom-questioned superiority of modern science over ancient cosmology. By restoring and reanimating this ancient scientific worldview, Genesis of the Cosmos leads us beyond the restrictive metaphors of modern science and into a new science for the 21st century.