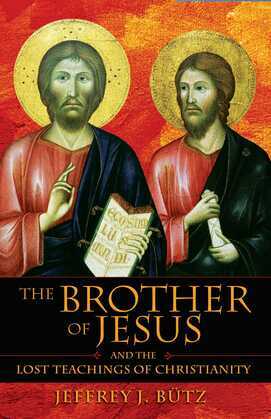 The Brother of Jesus and the Lost Teachings of Christianity

Reveals the true role of James, the brother of Jesus, in early Christianity

• Uses evidence from the canonical Gospels, apocryphal texts, and the writings of the Church Fathers to reveal the teachings of Jesus as transmitted to his chosen successor: James

• Shows how James can serve as a bridge between Christianity, Judaism, and Islam

James has been a subject of controversy since the founding of the Church. Evidence that Jesus had siblings contradicts Church dogma on the virgin birth, and James is also a symbol of Christian teachings that have been obscured. While Peter is traditionally thought of as the leader of the apostles and the “rock” on which Jesus built his church, Jeffrey Bütz shows that it was James who led the disciples after the crucifixion. It was James, not Peter, who guided them through the Church's first major theological crisis--Paul's interpretation of the teachings of Jesus.

Using the canonical Gospels, writings of the Church Fathers, and apocryphal texts, Bütz argues that James is the most overlooked figure in the history of the Church. He shows how the core teachings of Jesus are firmly rooted in Hebraic tradition; reveals the bitter battles between James and Paul for ideological supremacy in the early Church; and explains how Paul's interpretations, which became the foundation of the Church, are in many ways its betrayal. Bütz reveals a picture of Christianity and the true meaning of Christ's message that are sometimes at odds with established Christian doctrine and concludes that James can serve as a desperately needed missing link between Christianity, Judaism, and Islam to heal the wounds of centuries of enmity.