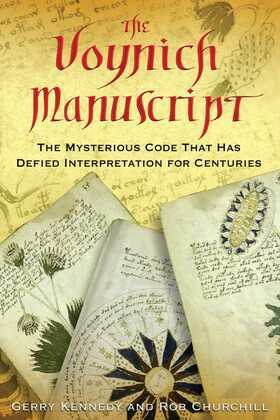 An examination of the many theories surrounding this enigmatic text, apparently written in code

• Reveals the connections between this work and the Cathars, Roger Bacon, and John Dee

• Explains the cryptanalysis methods used in attempts to break the code

• Includes color images from the manuscript juxtaposed with other medieval writings

Since its discovery by Wilfrid Voynich in an Italian monastery in 1912, the Voynich Manuscript has baffled scholars and cryptanalysists with its unidentifiable script and bizarre illustrations. Written in an unknown language or an as yet undecipherable code, this medieval manuscript contains hundreds of illustrations of unknown plants, cosmological charts, and inexplicable scenes of naked “nymphs” bathing in a green liquid that some interpret as a symbolic depiction of human reproduction and the joining of the soul with the body.

Gerry Kennedy and Rob Churchill explore the mystery surrounding the Voynich Manuscript, examining the many existing theories about the possible authors of this work and the information it may contain. They trace the speculative history of the manuscript and reveal those who may be connected to it, including Roger Bacon, John Dee, and the Cathars. With the possibility that it may be a lost alchemical text or other esoteric work, this manuscript remains one of the most intriguing yet enigmatic documents ever to have come to light.

Gerry Kennedy is a freelance writer and has produced a number of BBC Radio 4 programs, including one on the Voynich Manuscript in 2001. Rob Churchill is a professional writer who has written scripts for many production companies, including the BBC and Thames Television. Both authors were consultants for the BBC/Mentorn Films documentary The Voynich Mystery. They live in London.