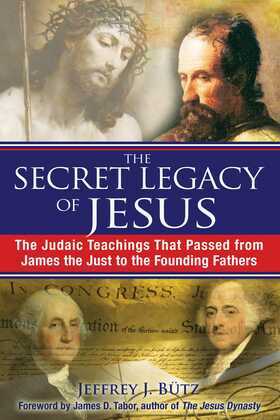 The Secret Legacy of Jesus

• Reveals for the first time the hidden link that connects James the Brother, Islam, the Cathars, the Knights Templar, and Freemasonry

With the success of Paul’s desire to impose his vision for the Church, the true teachings of Jesus--as preserved by his family and disciples--were forced into hiding. This clandestine movement was evidenced by such early groups as the Nazarenes, Ebionites, and Elkesaites but is generally thought to have died out when the Church of Paul branded these groups as heretics. However, despite the ongoing persecution by the Roman Catholic orthodoxy, this underground Jewish strain of Christianity was able to survive and resist incorporation into its more powerful rival. Jeffrey Bütz, author of The Brother of Jesus and the Lost Teachings of Christianity, reveals for the first time the hidden theological link that connects James the Brother of Jesus and the Ebionites with the religion of Islam, the Cathars, the Knights Templar, and Freemasonry.

In The Secret Legacy of Jesus, Bütz demonstrates how this centuries-old underground stream of Christ’s original teachings remained alive and how it surfaced again in Colonial America, where the Founding Fathers used Masonic principles rooted in Jewish Christian teachings to establish what they believed would be a “New Jerusalem.” With the rise of a fundamentalist Christianity, this potent spiritual vision was lost, but Bütz contends it can be recovered and used to bring about the reconciliation of Christians, Jews, and Muslims throughout the world.