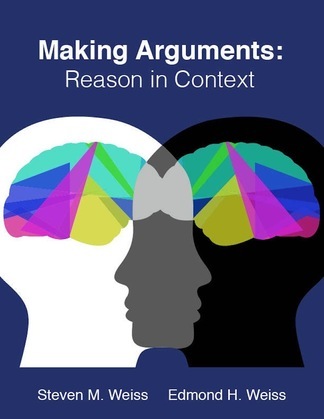 Making Arguments: Reason in Context offers a new approach to the teaching of argumentation and debate.

Nearly all argumentation courses and textbooks tilt toward one of two extremes:

* Critical thinking/informal logic, in which the "laws" of reasoning are universal and not affected by audience or context

* Public speaking, in which adaptation to the audience and winning assent trumps logic and reasoning

At the first extreme are texts that stress flaws in arguments and how to discern them. Their focus tends to be on the logic (making deductive inferences and avoiding deductive mistakes or other errors of inference) and/or the recognition of fallacies (deficient or fake arguments). They also deal with the messy ambiguities of language. Generally, this approach omits the concept of an audience. And it does not explain how spotting the flaws in reasoning, or improving one's reasoning, translates into the ability to make an effective argument. Further, it is not clear how to address audiences whose grasp of logic is shaky.

At the other extreme are books (especially public speaking textbooks) that err in the opposite direction. They are fixated on audience. As a result, their advice about how to argue is grounded in audience adaptation. In fact, the process of reasoning is nearly subordinated to such secondary considerations as style, delivery, and organization. And again, the connection between critical thinking/logic and audience is rarely examined.

In Making Arguments, we propose to consider argument at the nexus of invention and judgment, the two endpoints from which logic and public speaking examine argumentation, respectively. By looking at the "stuff" that comes between an argument's design and its delivery, we hope to enrich the understanding and the study of argument, as both a theoretical and applied discipline.

In particular, we want to answer some questions that are seldom addressed in print:

* What is the starting point for augmentation? When do we even need to argue?

* Why does the same argument work in one place and fail in another?

* Are most audiences capable of understanding a complex argument?

* With what authority can one make an argument—absent expertise in the field in which the argument takes place?

* Are there substantive differences between oral and written argument?

* What does it mean to "present" an argument?

* Can someone control the argumentative situation/context to the benefit of his/her position?

* How can argument educate and improve the arguer?

* Can we learn the "truth" by arguing?

This book addresses the whole advocacy process as a series of concatenated intellectual decisions affecting how arguments are created, ordered, rendered, and produced—with judgment as the over-arching concern.