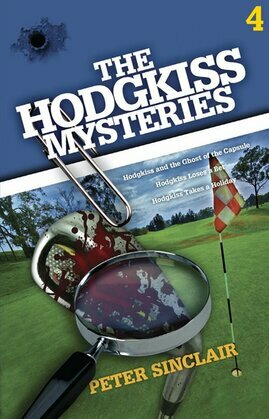 Hodgkiss and the Ghost of the Capsule / Hodgkiss Loses a Bet / Hodgkiss Takes a Holiday - Hodgkiss returns - sharper and crankier than ever. When he accompanies his daughter, Esme, and her husband, Detective Sergeant Donald Burke, on what he fears will be a boring holiday to a Pacific island paradise, Hodgkiss' instincts soon detect tension among the locals when a time capsule, buried twenty years earlier, is about to be raised prematurely. His investigations among the colourful island characters enable him to solve several mysteries that have puzzled the locals for years, including a twenty-year-old murder.- When the homes of a major property developer and the chief town planner of the terminally corrupt Kanundda Council are both burgled on the same night, Hodgkiss' suspicions are aroused and the complications come thick and fast, including anonymous tipoffs to Donald and mysterious pasted-up notes. He and Donald have a bet on who will be the first to identify the burglars and a body found buried in the Kanundda National Park.- As a result of this bet Hodgkiss has arranged for the Burke menage to spend a week's holiday at a plush resort in the mountains. Unfortunately the whole of Kanundda Council, a body which is frequently the object of Hodgkiss' scorn in frequent letters to the local paper, is booked into the same resort for a brainstorming session. But when the body of a young woman, whom Hodgkiss had befriended, is found beaten to death, Hodgkiss uses all his wits to expose the killer.In this fourth volume of stories the sharp sixty-eight year-old shows how logic and the ability to observe circumstances and events brings surprising results.