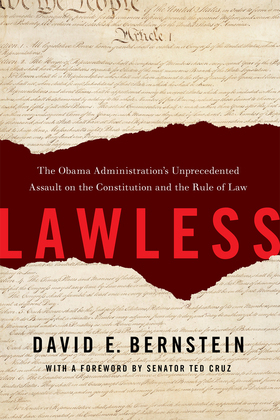 by David E. Bernstein (Author)
Excerpt
Nonfiction Law Public Constitutional Social science Political science Constitutions Government Executive branch
warning_amber
One or more licenses for this book have been acquired by your organisation details
EPUB
Unlimited loans, One at a time
Details
In Lawless, George Mason University law professor David E. Bernstein provides a lively, scholarly account of how the Obama administration has undermined the Constitution and the rule of law.

Lawless documents how President Barack Obama has presided over one constitutional debacle after another—Obamacare; unauthorized wars in the Middle East; attempts to strip property owners, college students, religious groups, and conservative political activists of their rights; and many more.

Violating his own promises to respect the Constitution’s separation of powers, Obama brazenly ignores Congress when it won’t rubber-stamp his initiatives. “We can’t wait,” he intones when amending Obamacare on the fly or signing a memo legalizing millions of illegal immigrants, as if Congress doing its job as a coequal branch of government somehow permits the president to rule like a dictator, free from the Constitution’s checks and balances.

President Obama has also presided over the bold and rampant lawlessness of his underlings. Harry Truman famously said, “The buck stops here.” When confronted with allegations that his administration’s actions are illegal, Obama responds, “So sue me.”

Lawless shows how President Obama has betrayed not only the Constitution but also his own stated principles. In the process, he has done serious and potentially permanent damage to our constitutional system. As America swings into election season, it will have to grapple with finding a president who can repair Obama’s lawless legacy.
Contributor
Ted Cruz (Introduction author)
Publication date
November 17, 2015
Publisher
Encounter Books
Page count
216
ISBN
9781594038341
Paper ISBN
9781594038334
File size
1 MB