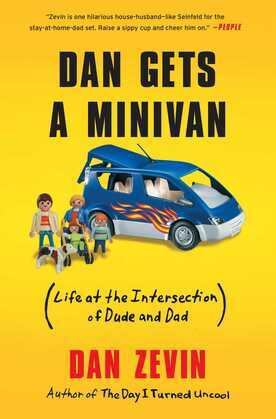 Dan Gets a Minivan

A coming-of-middle-age tale told with warmth and wit, Dan Gets a Minivan provides the one thing every parent really needs: comic relief. Whether you?re a dude, a dad, or someone who?s married to either, fasten your seat belt and prepare to crack up.

The least hip citizen of Brooklyn, Dan Zevin has a working wife, two small children, a mother who visits each week to ?help,? and an obese Labrador mutt who prefers to be driven rather than walked. How he got to this point is a bit of a blur. There was a wedding, and then there was a puppy. A home was purchased in New England. A wife was promoted and transferred to New York. A town house. A new baby boy. A new baby girl. A stay-at-home dad was born. A prescription for Xanax was filled. Gray hairs appeared; gray hairs fell out. Six years passed in six seconds. And then came the minivan.

Dan Zevin, master of ?Seinfeld-ian nothingness? (Time), is trying his best to make the transition from couplehood to familyhood. Acclimating to the adult-oriented lifestyle has never been his strong suit, and this slice-of-midlife story chronicles the whole hilarious journey?from instituting date night to joining Costco; from touring Disneyland to recovering from knee surgery; from losing ambition to gaining perspective. Where it?s all heading is anyone?s guess, but, for Dan, suburbia?s calling?and his minivan has GPS.