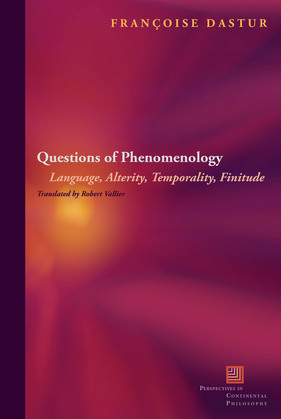 Dastur is well respected in France and Europe for her mastery of phenomenology as a movement and her clear and cogent explications of phenomenology in movement. These qualities are on display in this remarkable volume. The book is organized into four areas of inquiry: "Language and Logic," "The Self and the Other," "Temporality and History," and "Finitude and Mortality." In each, Dastur guides the reader through a series of phenomenological questions that also serve to call phenomenology itself into question, testing its limits and pushing it in new directions. Taking a cue from Merleau-Ponty, Dastur sees phenomenology not as a doctrine, a catalogue of concepts and catchphrases authored by a single thinker, but rather as a movement in which several thinkers participate, each contributing to and inflecting the movement in unique ways. Through her critical and productive dialogue with multiple phenomenological thinkers, Dastur concisely shows each thinker's debts to and departures from others, as well as each thinker's innovations and limitations. She does this judiciously, without choosing sides because, for her, phenomenology is above all a way of thinking through a problem and practicing a method. The fecundity of the movement is appreciated only by participating in it-phenomenology has always thought of itself as philosophical research undertaken by and through a community of thinkers who share certain fundamental questions and ways of approaching those questions, even if their responses to these questions often differ. In this regard, Dastur is both one of the clearest guides to phenomenology and one of its ablest practitioners.