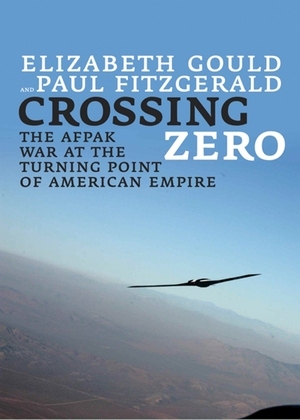 Crossing Zero: The AfPak War at the Turning Point of American Empire

The war in Afghanistan has become the most complex foreign policy problem the United States has ever faced, spreading into Pakistan and involving the conflicting interests of Russia, India, China and Iran. Written as a companion to Elizabeth Gould and Paul Fitzgerald's widely acclaimed book Invisible History: Afghanistan's Untold Story, Crossing Zero focuses on the nuances of the Obama administration's evolving military and political strategy, the people implementing it, and the long-term consequences for the United States and the region.

"Fitzgerald and Gould have consistently raised the difficult questions and inconvenient truths about western engagement in Afghanistan. While many analysts and observers have attempted to wish a reality on a grim and tragic situation in Afghanistan, Fitzgerald and Gould have systematically dug through the archives and historical record with integrity and foresight to reveal a series of misguided strategies and approaches that have contributed to what has become a tragic quagmire in Afghanistan. I suspect that many of their assessments while presently viewed as controversial and contentious, will eventually be considered conventional wisdom."—Thomas Johnson

"Americans are now beginning to grasp the scope of the mess their leaders made while pursuing misguided military adventures into regions of Central Asia we once called 'remote.' How this happened—and what the US can do to extricate itself from its entanglements in Pakistan and Afghanistan—is the story of Crossing Zero. Based on decades of study and research, this book draws lines and connects dots in ways few others do. It is clear, sober and methodical—an ideal handbook for anyone seeking to understand how the US became the latest imperial power to blunder into this turbulent and fascinating region."—Stephen Kinzer, author of All the Shah's Men and Reset: Iran, Turkey and America's Future

"I loved it. An extraordinary contribution to understanding war and geo-politics in Afghanistan that will shock most Americans by its revelations of official American government complicity in using, shielding, sponsoring and supporting terrorism. A devastating indictment on the behind-the-scenes shenanigans by some of America's most respected statesmen."—Daniel Estulin

"Gould and Fitzgerald have identified the triumphalist strain that has marked American foreign policy over the past 100 years and documented President Obama's failure to introduce change to American national security policy. The war in Afghanistan is consistent with previous failures in U.S. policymaking over the past 50 years as well as with the misuse of military force. This book should be required reading at the National Security Council and the Pentagon."—Melvin A. Goodman; CIA Senior Soviet Analyst, 1966-1990; Professor of International Security at the National War College,1986-2004; Senior Fellow, Center for International Policy, Washington, DC.

Paul Fitzgerald and Elizabeth Gould, a husband and wife team, began working together in 1979 co-producing a documentary for Paul's television show, Watchworks. Called, The Arms Race and the Economy, A Delicate Balance, they found themselves in the midst of a swirling controversy that was to boil over a few months later with the Soviet invasion of Afghanistan. Their acquisition of the first visas to enter Afghanistan granted to an American TV crew in the spring of 1981, brought them into the middle of the most heated Cold War controversy since Vietnam. But the pictures and the people inside Soviet occupied Afghanistan told a very different story from the one being broadcast on the evening news.