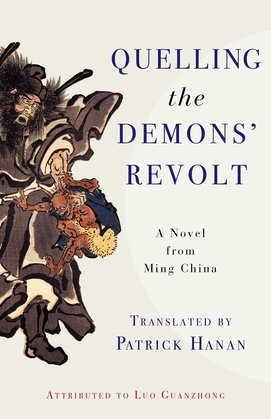 In this Ming-era novel, historical narrative, raucous humor, and the supernatural are interwoven to tell the tale of an unsuccessful attempt to overthrow the Song dynasty. A poor young girl meets an old woman who gives her a magic book that allows her to create rice and money. Her father, terrified that his daughter's demonic nature might be discovered, marries her off. Forced to flee, she and others with supernatural abilities find themselves in the midst of a grotesque version of a historical uprising, in which facts are intermingled with slapstick humor and wild fictions.

Attributed to the writer Luo Guanzhong, Quelling the Demons' Revolt is centered on the events of the rebellion led by Wang Ze in 1047–48. But it is a distorted, humorous version, in which Wang Ze's lieutenants show up as a comical peddler and a mysterious Daoist priest and a celebrated warrior appears despite having died many years earlier. Rather than fantastic adventures and supernatural marvels, the author points to human vanities and fixations as well as social injustice, warning of the vulnerability of any pursuit of order in a world plagued by demonic forces as well as mundane corruption. Although the story takes place long before the era in which it was written, ultimately Quelling the Demons' Revolt is the story of the Ming dynasty in Song masquerade, presciently warning of the dynasty's downfall. The novel is divided into chapters, but in many ways it is an arrangement of self-contained stories that draw on vernacular storytelling. This translation offers English-speaking readers a spirited example of social critique combined with caustic humor from the era of Luo Guanzhong.