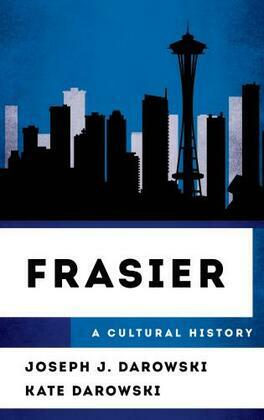 After America’s most pompous barhound left the Cheer’s gang in Boston, he returned to Seattle and found himself surrounded by an equally colorful cast of friends and family alike. For eleven seasons, radio psychiatrist Frasier Crane contended with his blue-collar ex-cop father Martin, English caretaker Daphne, coworker Roz, and his younger brother Niles. Looking at the world through Frasier’s aristocratic, witty lens, the show explored themes of love, loss, friendship, and what it might mean to live a full life. Both fans and critics loved Frasier, and the show’s 37 primetime Emmy wins are the most ever for a comedy series.

In Frasier: A Cultural History, Joseph J. Darowski and Kate Darowski offer an engaging analysis of the long-running, award-winning show, offering insights into both the onscreen stories as well as the efforts behind the scenes to shape this modern classic. This volume examines the series as a whole, but also focuses on the show’s key characters, including Eddie, the canine. Close looks at set design, class issues, and gender roles are also provided, along with opinionated reviews of all 264 episodes, highlighting the peaks and dips in quality across more than a decade of television.

Despite the show’s focus on an elitist intellectual—and his equally snooty brother—Frasier often embraced farce on a level previously unseen in American sitcoms, a mix of comedic elements that endeared it to viewers around the world. Frasier: A Cultural History will appeal to the show’s many fans as well as to scholar of media, television, and popular culture.