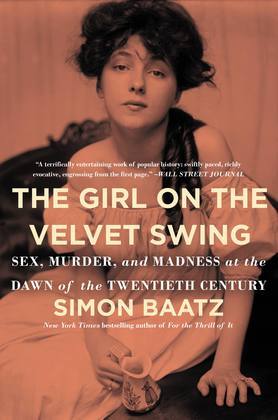 The Girl on the Velvet Swing

In 1901, Evelyn Nesbit, the pin-up girl and New York society darling, dined with Stanford White in his 24th St. apartment. The two drank champagne, and Evelyn was dazzled by a tour of his sumptuously decadent rooms, a tour which ended on a velvet couch in his floor-to-ceiling paneled "mirror room." Evelyn was given more champagne, lost consciousness, and woke, nearly naked, in bed next to Stanford White. White, an acclaimed architect and notorious womanizer, was 47. Evelyn Nesbit was just 16.
Four years later, Evelyn would marry Harry Thaw, a playboy millionaire rumored to be mentally disturbed. One night in 1906, a vengeful Thaw shot and killed White before hundreds of theatre-goers during a performance at Madison Square Garden--a venue designed by Stanford White himself. The murder and ensuing trial were the scandal of the century, perhaps the nation's first tabloid murder, and a pivotal moment in turn-of-the-century America.

In the tradition of books like The Devil in the White City by Erik Larsen, Sins of the Second City by Karen Abbot and The Murder of the Century by Paul Collins, this is a true crime story with a narrative as page-turning as a thriller.