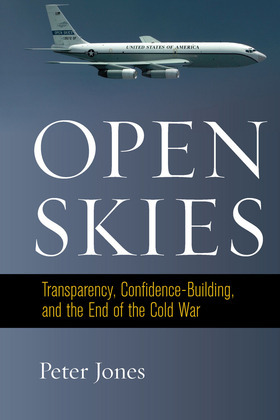 by Peter Jones (Author)
Excerpt
Nonfiction Social science Political science Political freedom & security International security
warning_amber
One or more licenses for this book have been acquired by your organisation details
EPUB
Unlimited loans, One at a time
Details

This book recounts and analyzes the history of one of the best-kept diplomatic and security secrets of the last half-century—the Open Skies Treaty: a treaty that allows the U.S., the Russian Federation, and over 30 other signatories to fly unarmed reconnaissance aircraft over one another's territory. First proposed by President Eisenhower in 1955, shelved by succeeding administrations, re-launched by President George H. W. Bush in 1989, and finally ratified in 2002, the Treaty has been one of the most important security instruments of the 21st century—with over 1,000 flights logged to date providing confidence for the governments, intelligence communities, and militaries of former and potential adversaries.

Written by a professor and former diplomat who was deeply involved in the negotiations of the Open Skies Treaty from 1989 to 1995, this book is a meticulous work of political history that explores how Open Skies affected, and was affected by, the extraordinary times of its negotiation—during which the Cold War ended and the Soviet Union collapsed. But it is also a potential blueprint for future applications of the Open Skies concept by providing insights into the role that cooperative aerial monitoring can play in helping to transform other difficult relationships around the world. As such it will serve as a negotiation handbook for diplomats, bureaucrats, and politicians and as a case-study textbook for IR students and students of diplomacy.