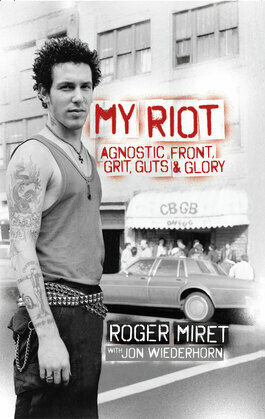 Gangs of New York meets Mean Streets in this brutally honest memoir about surviving the treacherous 1980s Lower East Side and finding refuge and a voice in music.

Filled with danger, drugs, and abrasive music, My Riot is the definitive insider account of the volatile New York hardcore scene of the early 1980s. With Roger Miret as front man, legendary band Agnostic Front’s focused fury and aggression defined the times and continue to resonate today.

Born in Cuba, Roger Miret fled with his family to the US to escape the Castro regime. Through vivid language and graphic details, Miret recounts growing up in a strange new land with a tyrannical, abusive stepfather and the roles that poverty and violence played in shaping the toughness that became critical to his survival. In his teen years, he finds himself squatting in abandoned buildings with other runaways and victims of similar childhood trauma. Soon he becomes a respected and feared kingpin of the scene, and a protector of its misfits and outcasts.

Miret’s gripping memoir is a testament to the perils of growing up too young too fast and finding redemption through sheer strength, perseverance, and courage.

Roger Miret is a pioneer of the New York Hardcore scene. The Cuban-born singer joined Agnostic Front in 1983, and the seminal group released classics like United Blood, Victim In Pain and Cause For Alarm over the next several years. Miret also fronts his own solo group, Roger Miret and The Disasters. He lives in Scottsdale, Arizona.

Jon Wiederhorn is the author of Louder Than Hell: The Definitive Oral History of Metal (with Katherine Turman) and the co-author of Ministry: The Lost Gospels According to Al Jourgensen (with Al Jourgensen) and I'm the Man: The Story of That Guy from Anthrax (with Scott Ian). He has written for Rolling Stone, SPIN, MTV, Guitar World and Revolver, among others. He lives in Montclair, New Jersey.