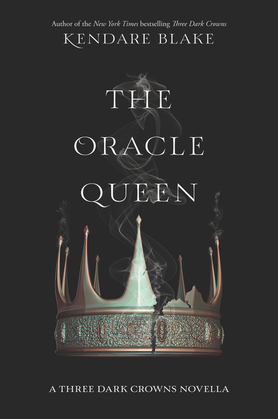 The #1 New York Times bestselling author of the Three Dark Crowns series introduces readers to the Oracle Queen in this riveting prequel novella. Fans of the series will be enthralled with Queen Elsabet’s genesis, riveted by her madness, and compelled by her tragic—and bloody—reign.

Triplet queens born on the island of Fennbirn can be many things: Elementals. Poisoners. Naturalists. If an oracle queen is born, however, one with the gift of sight, she’s immediately drowned, extinguishing her chance at ever taking the throne.

But that’s not how it always was. This cautionary practice started long ago, with Queen Elsabet—the legendary, and last, oracle queen—whose reign was tinged with blood and horror.

Paranoid, ruthless, and utterly mad, Elsabet’s mistrust led to the senseless slaying of three entire houses of innocent people. At least, that’s the unchallenged tale carried down from generation to generation. But what really happened? Discover the true story behind the queen who, though born with the gift of sight, could not foresee her swift and sudden fall from power . . . until it was too late.