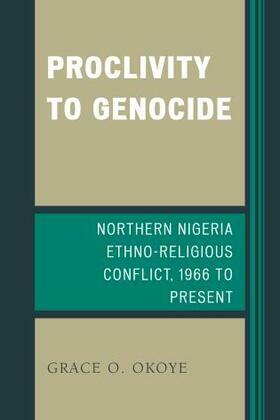 This book examines proclivity to genocide in the protracted killings that have continued for decades in the northern Nigeria ethno-religious conflict, spanning from the 1966 northern Nigeria massacres of thousands of Ibos up to the present, ongoing killings between extremist Muslims and Christians or non-Muslims in the region. It explores the ethnic and religious dimensions of the conflict over five phases to investigate genocidal proclivity to the killings and the extent to which religion foments and escalates the conflict.

This book adopts a conceptual analytic approach of establishing similarity of genocidal patterns to the northern Nigeria ethno-religious conflict by examining genocidal occurrences and massacres in history, particularly the twentieth-century contemporary genocides, for an understanding of genocide. With this reference frame, the study structures a Genocide Proclivity Model for identifying inclinations to genocide and derives a substantive theory using the Strauss and Corbin (1990) approach.

By identifying genocidal intent as underlying the various manifestations and causes of genocide in specific genocide cases, the book establishes that genocidal proclivity or the intent to exterminate the “other” on the basis of religion and/or ethnicity underlies most of the northern Nigerian episodic, but protracted, killings. The book’s analytic framework and approach are grounded in identifiable and provable evidences of specific intent to annihilate the “other,” mostly involving extremist Muslims intent to ‘cleanse’ northern Nigeria of Christians and other non-Muslims through the ‘exclusionary ideology’ of imposition of the Sharia Law, and to ‘force assimilation’ or ‘extermination’ through massacres and genocidal killings of those who refuse to assimilate or adopt the Muslim ideology. The study establishes that the genocidal inclinations to the conflict have remained latent because of the intermittent but protracted nature of the killings and lends credence to the conception of genocidal intent and its covertness in situations of genocidal intermittency. The book unearths the latency of episodic genocide in the northern Nigeria ethno-religious conflict, prescribes recommendations, and launches a clarion call for international intervention to stop the genocide.