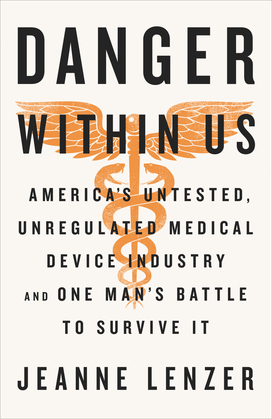 The Danger within Us

A shocking exposé of the dangerously under-regulated medical device industry, revealing the corruption, greed, and deceit that has helped make medical interventions a leading cause of death in America. Medical interventions have become the third leading cause of death in America, killing more Americans each year than diabetes, murders, car accidents and AIDS combined. In THE DANGER WITHIN US, award-winning journalist Jeanne Lenzer brings this horrifying statistic to life through the story of one working class man who, after his "cure" nearly kills him, ends up in a battle for justice against the medical establishment.

His crusade leads Lenzer on a journey through the dark underbelly of the medical device industry, a fascinating and disturbing world that hasn't been written about before. What Lenzer exposes will shock readers: rampant corruption, elaborate cover-ups, shameless profiteering, and astonishing lack of oversight, all of which leads to dangerous devices (from artificial hips to pacemakers) going to market and into our bodies.

In the vein of America's Bitter Pill and A Civil Action, THE DANGER WITHIN US is a meticulously researched and propulsive read that will fill you with anger and indignation, a stirring call for reform, and a must-read for anyone who cares about the future of American healthcare.